If you’re interested in growing your own nanoparticles, read on! Producing nanoparticles involves breaking up a bulk material into atoms or ions and then allowing those atoms or ions to condense into nanoparticles. This process actually happens, in a basic and an inefficient way, in your campfire, which produces a small quantity of carbon nanotubes.

Equipment designed to produce nanoparticles makes the process more efficient by breaking down more of the raw material to the atomic level under controlled conditions to condense atoms together and form nanoparticles.

Several types of systems are used to produce nanoparticles. A description of a few commonly used systems follows.

In a plasma source system, an inert gas, such as argon, flows into a chamber.This gas carries macroscopic particles of the material from which you want to produce nanoparticles. A high-power radio frequency signal applied to the carrier gas produces plasma, which then flows into a cooled chamber, as illustrated in Figure 4-15. The ions then condense into nanoparticles. This method is often used for volume production of metallic nanoparticles. 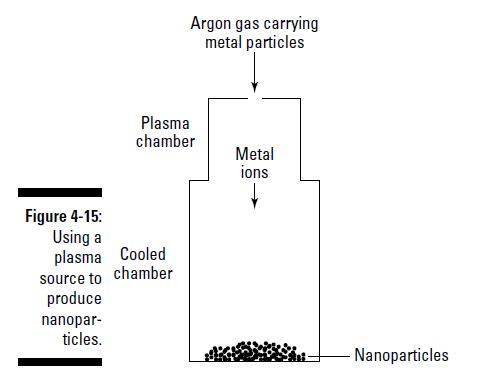 If you’re interested in growing only small quantities of nanoparticles, you might try a spark system. This system uses a high-voltage pulse to create a spark between two electrodes. The electrodes are made from the material from which you want to create nanoparticles. The spark causes atoms to evaporate from the electrodes, and the atoms then move into the flow of the argon carrier gas to the condensation chamber, as illustrated in Figure 4-16. 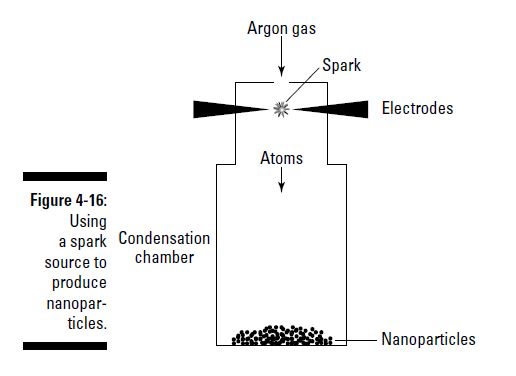 One other option for producing nanoparticles is a laser ablation system. In this type of system, you focus a laser beam on a target that has been preheated in a furnace. The target is made of the same material from which you want to create nanoparticles. The laser vaporizes atoms off the target and a flow of argon gas sweeps the atoms downstream to the condensation chamber, as illustrated in Figure 4-17. 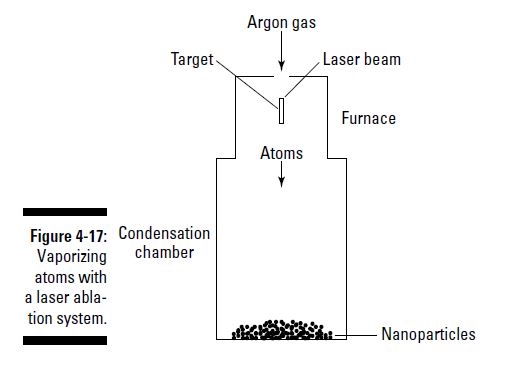 If you want to grow carbon nanotubes, you might also try a plasma-enhanced chemical vapor deposition system. This type of system uses a gaseous source instead of a solid target or powder, as in other systems we’ve discussed. A gas, such as methane, flows between two electrodes to which you’ve applied a high-power radio frequency signal. This procedure generates a plasma, breaking up the methane or other source gas into atoms. A substrate is mounted on one of the electrodes, as illustrated in Figure 4-18.

Particles on the surface of the substrate act like seed crystals because carbon naturally bonds to them. Additional carbon atoms bond to the carbon atoms already in place until — voilá — you’ve grown a carbon nanotube.