Nanotechnology may hold the key to making space flight more practical. Advancements in nanomaterials make lightweight solar sails and a cable for the space elevator possible. By significantly reducing the amount of rocket fuel required, these advances could lower the cost of reaching orbit and traveling in space. In addition, new materials combined with nanosensors and nanorobots could improve the performance of spaceships, spacesuits, and the equipment used to explore planets and moons, making nanotechnology an important part of the ‘final frontier.’

Researchers are looking into the following applications of nanotechnology in space flight: 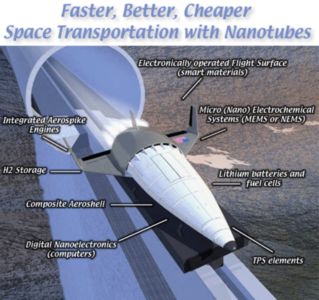 The Center for Nanotechnology at NASA Ames is looking at how nanotechnology can be used to reduce the mass, volume, and power consumption of a wide range of spacecraft systems including sensors, communications, navigation, and propulsion systems.

The Johnson Space Center Nano Materials Project is working on nanotube composites with the aim of reducing spacecraft weight.

The LiftPort Group is dedicated to making the space elevator reality. Their target date is October, 2031.

The Space Nanotechnology Laboratory at MIT is developing high performance instrumentation for use on spaceflights.