It is a ball milling process where a powder mixture placed in the ball mill is subjected to high-energy collision from the balls. This process was developed by Benjamin and his coworkers at the International Nickel Company in the late of 1960. It was found that this method, termed mechanical alloying, could successfully produce fine, uniform dispersions of oxide particles (Al2O3, Y2O3, ThO2) in nickel-base superalloys that could not be made by more conventional powder metallurgy methods. Their innovation has changed the traditional method in which production of materials is carried out by high temperature synthesis. Besides materials synthesis, high-energy ball milling is a way of modifying the conditions in which chemical reactions usually take place either by changing the reactivity of as-milled solids (mechanical activation — increasing reaction rates, lowering reaction temperature of the ground powders)—or by inducing chemical reactions during milling (mechanochemistry). It is, furthermore, a way of inducing phase transformations in starting powders whose particles have all the same chemical composition: amorphization or polymorphic transformations of compounds, disordering of ordered alloys, etc.

The alloying process can be carried out using different apparatus, namely, attritor, planetary mill or a horizontal ball mill. However, the principles of these operations are same for all the techniques. Since the powders are cold welded and fractured during mechanical alloying, it is critical to establish a balance between the two processes in order to alloy successfully. Planetary ball mill is a most frequently used system for mechanical alloying since only a very small amount of powder is required. Therefore, the system is particularly suitable for research purpose in the laboratory. The ball mill system consists of one turn disc (turn table) and two or four bowls. The turn disc rotates in one direction while the bowls rotate in the opposite direction. The centrifugal forces, created by the rotation of the bowl around its own axis together with the rotation of the turn disc, are applied to the powder mixture and milling balls in the bowl. The powder mixture is fractured and cold welded under high energy impact.

The figure below shows the motions of the balls and the powder. Since the rotation directions of the bowl and turn disc are opposite, the centrifugal forces are alternately synchronized. Thus friction resulted from the hardened milling balls and the powder mixture being ground alternately rolling on the inner wall of the bowl and striking the opposite wall. The impact energy of the milling balls in the normal direction attains a value of up to 40 times higher than that due to gravitational acceleration. Hence, the planetary ball mill can be used for high-speed milling. 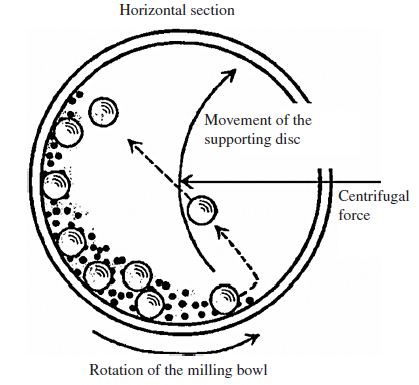 Schematic view of motion of the ball and powder mixture.

During the high-energy ball milling process, the powder particles are subjected to high energetic impact. Microstructurally, the mechanical alloying process can be divided into four stages: (a) initial stage, (b) intermediate stage, (c) final stage, and (d) completion stage.

(a) At the initial stage of ball milling, the powder particles are flattened by the compressive forces due to the collision of the balls. Micro-forging leads to changes in the shapes of individual particles, or cluster of particles being impacted repeatedly by the milling balls with high kinetic energy. However, such deformation of the powders shows no net change in mass.

(b) At the intermediate stage of the mechanical alloying process, significant changes occur in comparison with those in the initial stage. Cold welding is now significant. The intimate mixture of the powder constituents decreases the diffusion distance to the micrometer range. Fracturing and cold welding are the dominant milling processes at this stage. Although some dissolution may take place, the chemical composition of the alloyed powder is still not homogeneous.

(c) At the final stage of the mechanical alloying process, considerable refinement and reduction in particle size is evident. The microstructure of the particle also appears to be more homogenous in microscopic scale than those at the initial and intermediate stages. True alloys may have already been formed.

(d) At the completion stage of the mechanical alloying process, the powder particles possess an extremely deformed metastable structure. At this stage, the lamellae are no longer resolvable by optical microscopy. Further mechanical alloying beyond this stage cannot physically improve the dispersoid distribution. Real alloy with composition similar to the starting constituents is thus formed.

Theoretical considerations and explorations of planetary milling process have been broadly studied in order to better understand and inteprate the concept. Joisel’s work is the first report to study the shock kinematics of a “satellite milling machine.” This work focused on the determination of the milling parameters that were optimized for shock energy. The various parameters were determined geometrically and the theoretical predictions were examined experimentally using a specifically designed planetary mill. Schilz et al. reported that from a macroscopical point of view, the geometry of the mill and the ratio of angular velocities of the planetary to the system wheel played crucial roles in the milling performance. For a particular ductile-brittle Mg–Si system, the milling efficiency of the planetary ball was found to be heavily influenced by the ratio of the angular velocity of the planetary wheel to that of the system wheel as well as the amount of sample load. Mio et al. studied the effect of rotational direction and rotation-to-revolution speed ratio in planetary ball milling. Some more theoretical issues and kinematic modeling of the planetary ball mill were reported later in related references. Because mechanical alloying of materials are complex processes which depend on many factors, for instance on physical and chemical parameters such as the precise dynamical conditions, temperature, nature of the grinding atmosphere, chemical composition of the powder mixtures, chemical nature of the grinding tools, etc., some theoretical problems, like predicting nonequilibrium phase transitions under milling, are still in debate.

Notwithstanding the drawbacks, high-energy ball milling process has attracted much attention and inspired numerous research interests because of its promising results, various applications and potential scientific values. The synthesis of nanostructured metal oxides for gas detection is one of the most promising applications of high-energy ball milling. Some significant works have been reported in recent years. Jiang et al.  prepared metastable a-Fe2O3−MO2 (M: Ti and Sn) solid solutions by high-energy milling for C2H5OH detection. The 85 mol% a-Fe2O3–SnO2 sample milled for 110 hours showed the highest sensitivity among all the samples studied. The best sensitivity to 1000 ppm C2H5OH in air at an operating temperature of 250 C was about 20. Zhang et al. synthesized FeSbO4 for LPG detection. They found that there were two-step solid-state reactions occurring in the raw powders during the ball milling:

The response and recovery times of their sensor were less than one second. The sensitivity to 1000 ppm C2H5OH at an operating temperature of 375 C was about 45. Diéguez et al. employed precipitation method to prepare nanocrystalline SnO2 and planetary milling to grind the obtained powder for NO2 detection. They found that the grinding procedure of the precursor and/or of the oxide had critical effect on the resistance in air. As a result, the gas sensing properties to NO2 had been considerably improved. Cukrov et al. and Kersen et al. synthesized SnO2 powders by mechanochemical processing for O2 and H2S sensing applications, respectively. The O2 sensor exhibited stable, repeatable and reproducible electrical response to O2. More recently, Yamazoe’s group reported the sensing properties of SnO2–Co3O4 composites to CO and H2. A series of SnO2–Co3O4 thick films containing 0–100% Co3O4 in mass were prepared from the component oxides through mixing by ball-milling for 24 h, screen-printing and sintering at 700 C for 3 h. The composite films were found to exhibit n- or p-type response to CO and H2 depending on the Co3O4 contents in the composites. The n-type response was exhibited at 200 C or above by SnO2-rich composites (Co3O4 content up to 5 mass%). The sensor response to both CO and H2 was significantly enhanced by the addition of small amounts of Co3O4 to SnO2, and the response at 250 C achieved a sharp maximum at 1 mass% Co3O4. The p-type response was obtained at 200 C or below by the composites containing 25–100 mass% Co3O4. The sensitivity as well as selectivity to CO over H2 could thus be increased by the addition of SnO2 to Co3O4.

Besides the above mentioned researches, significant efforts on the synthesis of nanostructured metal oxide with high-energy ball milling method for gas sensing have been actively pursued by the authors of this chapter. In our research, we use the high-energy ball milling technique to synthesize various nanometer powders with an average particle size down to several nm, including nano-sized a-Fe2O3 based solid solutions mixed with varied mole percentages of SnO2, ZrO2 and TiO2 separately for ethanol gas sensing application, stabilized ZrO2 based and TiO2 based solid solutions mixed with different mole percentages of a-Fe2O3 and synthesized SrTiO3 for oxygen gas sensing. The synthesized powders were characterized with XRD, TEM, SEM, XPS, and DTA. Their sensing properties were systematically investigated and sensing mechanisms were explored and discussed as well.