As far back as 1959, Roger Bacon had produced images of carbon nanotubes. In the 1980s, Howard Tennant applied for a patent for a method to produce them. In 1990, Richard Smalley postulated the concept that if buckyballs get big enough, they become carbon cylinders. But it wasn’t until 1991 that Sumio Iijima, a researcher at NEC’s Fundamental Research Lab, not only took photos of nanotubes, but also put two and two together to explain what nanotubes actually are — and put a name to them. He placed a sample of carbon soot containing buckyballs in an electron microscope to produce some photographs of buckyballs — which he in fact did — but some odd, needleshaped structures caught his attention.

It turned out that these needle shapes were actually cylinders of carbon atoms that were formed at the same time that the buckyballs were formed. Like buckyballs, these cylinders (called carbon nanotubes) are each a lattice of carbon atoms — with each atom covalently bonded to three other carbon atoms. Carbon nanotubes are basically buckyballs, but the end never closes into a sphere when they are formed. Instead of forming the shape of a sphere, the lattice forms the shape of a cylinder, as illustrated in Figure 4-4. 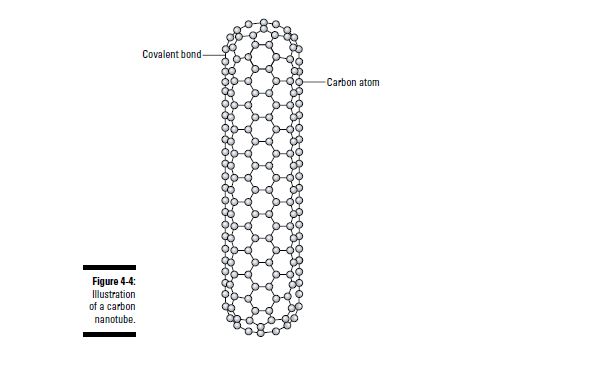 Nanotubes come in a couple of varieties. They can either be single-walled carbon nanotubes (SWNT) or multiwalled carbon nanotubes (MWNT). As you might expect, an SWNT is just a single cylinder, whereas an MWNT consists of multiple concentric nanotube cylinders, as illustrated in Figure 4-5. We’ll tell you about SWNTs rather than MWNTs, because most research is focused on developing uses for single-walled nanotubes. The length and diameter of SWNTs varies, but a typical SWNT would be about 1 nanometer in diameter and a few hundred nanometers in length. The smallest diameter anybody has ever seen in SWNTs is about the same as the C60 buckyball, just under 1 nanometer. 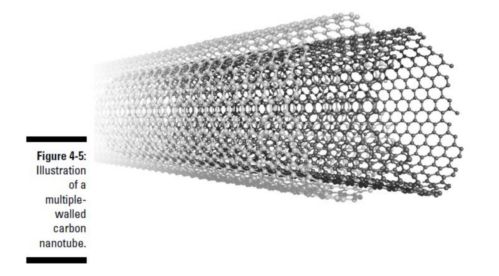